- What is the VoiceXML :
Also known as VXML is the technology allows a user to interact with the Internet through voice-recognition technology by using a voice browser and/or the telephone.
HTML of the voice web, the open standard markup language for voice applications.
Is the W3C's standard XML format for specifying interactive voice dialogues between a human and a computer.
It allows voice applications to be developed and deployed in an analogous way to HTML for visual applications. Just as HTML documents are interpreted by a visual web browser, VoiceXML documents are interpreted by a voice browser
Using VoiceXML, the user interacts with voice browser by listening to audio output that is either pre-recorded or computer-synthesized and submitting audio input through the user's natural speaking voice or through a keypad, such as a telephone.
- Common solutions and architecture .
A common architecture is to deploy banks of voice browsers attached to the Public Switched Telephone Network so that users can use a telephone to interact with voice applications.
Retrieve information such as bank balances, flight schedules, and movie show times from any telephone
The explosive growth of the Internet and World Wide Web technologies has shifted the landscape for providers of traditional phone services to a new set of customers accessing information and services through the Web. While in most cases customers still access automated services through the phone, providers are finding it easier to build new services that exploit the power of Web technology. 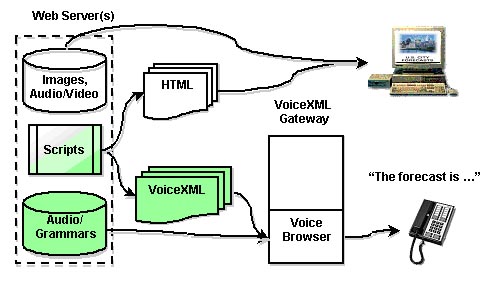 - Finally i hope this info is useful for you all.
Posted by NADY at 4:04 AM